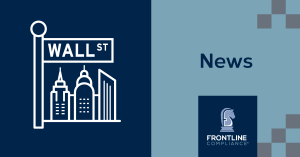 A recent criminal case involving a well know investment bank shows how the lure of high fees can lead individuals to circumvent compliance policies. Despite several red flags raised by compliance about a Malaysian private wealth client, Goldman Sachs bankers in Southeast Asia pursued deals leading to acts of bribery, money laundering, kickbacks and other criminal wrongdoing. The firm’s compliance due diligence concerns were not heeded, nor enforced, as the bankers concealed the deal transactions leading to criminal cases against them and the investment bank’s Malaysian unit. While US authorities are requiring Goldman to improve its compliance program, FrontLine’s Founder and President Amy Lynch comments that it will be a lesson learned and practices will change, but it may only have a temporary effect. Without consistently strong compliance practices, Ms. Lynch adds that the temptation of greed will continue to have consequences for Wall Street. See Bloomberg, “Goldman’s Failure to Heed 1MDB Red Flags Offers Lessons to Banks”